Aging is a complex biological process, a major aspect of which is the accumulation of somatic changes throughout life. Cellular senescence is a condition in which cells undergo an irreversible cell cycle arrest in response to various cellular stresses. Once the cells begin to senesce, they become more resistant to any mutagens, including oncogenic factors. Inflammaging (inflammatory aging) is an age-related, chronic, and systemic inflammatory condition realized by cells with the Senescence-Associated Secretory Phenotype (SASP). These recently recognized senescent phenotypes associated with aging have been reported to promote better wound healing, embryonic development, as well as stimulation and extension of the tumor process. It is assumed that cellular senescence contributes to the age-related decline of reproductive function due to the association of senescent cells with aging and age-related diseases. Thus, SASPs have both positive and negative effects, depending on the biological context. SASP cell accumulation in tissues contributes to an age-related functional decline of the tissue and organ state. In this review, the term “cellular senescence” is used to refer to the processes of cells irreversible growth inhibition during their viable state, while the term “aging” is used to indicate the deterioration of tissues due to loss of function. Late reproductive age is associated with infertility and possible complications of the onset and maintenance of pregnancy. Senescent cells express pro-inflammatory cytokines, growth factors, and matrix metalloproteinases and some other molecules collectively called the Senescence-Associated Secretory Phenotype (SASP). 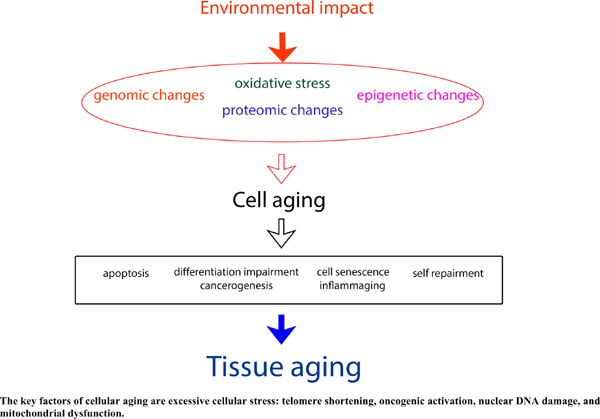